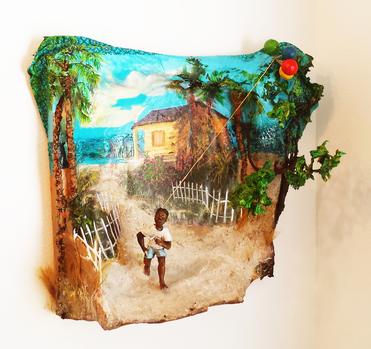 “Barrier Island” is a three-dimensional mixed media painting measuring  32” x 28” x 8” in size. It is made up of wood, wire, plaster, acrylic, fabric, sand, acrylic and polymer clay. The painting was created in response to police brutality and racial profiling in the United States, specifically the murder of twelve-year old Tamir Rice, in 2014, one of many police shootings in recent years.

The killing of Tamir Rice occurred in Cleveland Ohio on a cold, dark, snowy day. Responding to a 911 call reporting that a black male was wielding a pistol in a park video shows a police officer shooting the young boy out of a moving police car. The child died cold and alone. The painting, “Barrier Island”, makes reference in title to both the barriers and isolation faced by African Americans, and the literal meaning of an island that offers protection to main land from storms. The painting offers a re-presentation of a tragic incident where it does not occur. It represents a reversal, an undoing.

In the painting a boy made of clay is shown playing with a toy gun as Tamir Rice was on the day he was killed. He holds the toy gun in one hand and colored balloons that appear to fly up and out of the scene in the other. The balloons represent the innocence of the child and his spirit free and light. Instead of showing the boy in the cold, dark surroundings where Tamir Rice died, he is depicted on a bright sunny day in paradise, on the beach in white sand instead of snow. The painting extends from the wall where it hangs and transitions from two to three-dimensions. The boy appears to run dangerously close to the edge where he might fall off into space. Yet, he is stationary, forever safe in paradise, and in innocence. His soul is in heaven. “Barrier Island” represents a prayer for the peace of his soul and all the souls of those murdered by racism in America.

Recently, NFL football players have used their American visibility to speak out on racial injustice. They have taken a stand, in part by kneeling, at the start of games when America is reminded to consider what it means to be American. Players from competing teams come together in protest of institutionalized racism, racial profiling and police brutality. NFL football hero, former Bengals linebacker, Cincinnati City Councilman, Dartmouth College Alumnus, and Hall of Fame honoree, Reggie Williams has long been an integral part of the important conversation. Williams’ fine art collection is extensive and impressive containing many important works by African American artists, and includes historical works documenting the journey of civil rights for black people in the world.

In 2017 Williams purchased “Barrier Island”. The addition of Tonya Clay’s “Barrier Island” to his fine art collection is a reaffirmation of his dedication to the cause and to his support of the arts.